Rhys Ifans Added to Line-Up at Festival No. 6 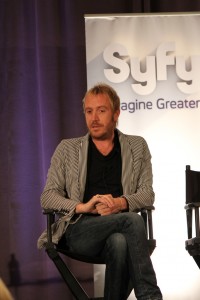 Festival No. 6 is an event that is surely on the rise with its credentials only set to be bolstered by the appearance of a real Hollywood star for 2014.

In a centenary year for esteemed laureate Dylan Thomas, organisers have secured the talents of none other than Rhys Ifans who you may recognise from his appearances in films such as Notting Hill, The Amazing Spider-Man and Harry Potter. He will be part of an ensemble production featuring the likes of Murray Lachlan Young, Kevin Allen Howard Marks and Stuart Maconie to celebrate the life of Thomas.

No. 6’s music line-up is also not to be sniffed at for 2014 and is more than a match for last year’s acts which included the likes of James Blake, New Order and Daughter. Taking to the stage this year will be indie master Beck, trip-hop trio London Grammar and king of electronica, Bonobo. No doubt you will have heard of the latter thanks to his long and glittering career with London Grammar’s explosion into life over the past year or so. Bonobo is a name that you will have to check out if you’re yet to as he is one of the best DJ’s on today’s circuit.

Elsewhere, the comedy line-up for No.6 is just as stellar and will feature the likes of Kosh Widdicombe, Henning Wehn, Robin Ince and Tony Law. Happy Mondays fans will also delight in seeing Bez host his Question Time in an effort to kick start his career as an MP and saviour of bees. Honestly.

Tim Burgess is also set to make a return to what is fast becoming his second home with the Tim Peaks Diner likely to be one of the big draws away from the Main Stage. In the diner, expect to see Bonehead of Oasis and other special guests receiving the interview treatment.

As a sign of just how big No. 6 is steadily becoming, the No. 6 Carnival, which was only started last year, is to be twice as large for 2014’s event. A spokesman said: “There will also be magical storytelling in the woods, pop-up theatre, book signings, torch-lit processions, art installations, Prisoner re-enactments, urban sketching classes, sand art, and much, much more throughout the weekend.”

The billing for Festival No. 6 is really starting to take shape with more names set to be announced before the action kicks off on the 5th of September until the 7th of September in Portmeirion.

For any further information, please visit the official Festival No. 6 website at: www.festivalnumber6.com