North Wales to Have Its Coldest Winter in 100 Years? 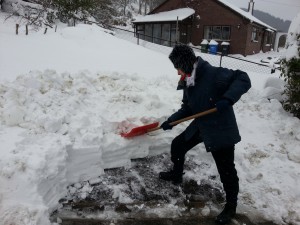 “Winter is coming” is not only the tagline for one of television’s hottest shows right now, Game of Thrones, but it also brings messages of gloom for North Wales residents over the next few months.

We should prepare for what experts are calling the “coldest winter in 100 years”. Quite the shock to the system considering what a mild autumn we have enjoyed in North Wales in 2014.

Local councils, however, are fully-prepared for arctic blizzards and the like as they prepare tens of thousands of salt and fleet in preparation for the havoc the weather will cause to the region’s roads. Priority routes will be maintained the most thoroughly which will keep disruptions to a minimum.

After analysing air flows in the upper atmosphere, weather experts believe that there could be one of the coldest winters on record ahead. A jet stream which usually keeps the extreme weather back is not in peak condition to do so this year, resulting in less than ideal conditions which could see temperatures plummet to as little as -2.7C.

Those who were around during the winter of 09/10 don’t need to be reminded just how difficult life in North Wales can be when the weather is at its worst.

Councillor Gareth Roberts, Gwynedd Council’s cabinet member for the environment, said: “When snow or ice is predicted, Gwynedd’s 670 miles of priority routes are pre-treated with salt and grit by the highways and municipal service — the equivalent of driving from Caernarfon to the city of Luxembourg.

“The council has fully restocked its salt barns so as to ensure that we are prepared for the winter season.”

A spokesperson for Anglesey council said: “The gritting teams are on stand-by to respond 24 hours a day, seven days a week, throughout the winter. Our gritting stocks are currently at full capacity in preparation for the winter months.”

A spokesperson for Denbighshire council said: “We will be using stocks of salt that we already have first, and calling up additional supplies as and when required.

“We are storing about 1,000 tonnes less this year — down from 10,000 tonnes last year. This isn’t down to any cost saving measures, but simply down to the fact that we don’t want to be holding salt for too long.”