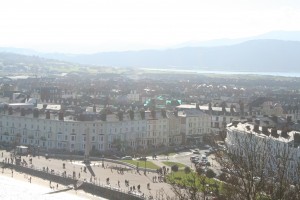 As a real gem in the crown of the North Wales coastline, Llandudno has been receiving the recognition it surely deserves and has earned a place in the top 10 travel destinations in the UK according to TripAdvisor.

The popular travel service has previously lauded some of the splendid accommodation you can find in the town but it’s great to see that the area as a whole has managed to crack the top 10 of the best places to take a holiday.

In fact, Llandudno was the only Welsh destination to make the top ten at all. Could this be confirmation that the town has now returned to its title of “The Queen of Welsh Resorts”? Based on the high popularity it has, beating out the likes of Birmingham and Leeds, it definitely seems so.

A TripAdvisor spokesman said: “These awards are based on millions of reviews and ratings by those that really matter – travellers themselves.”

General manager of Llandudno Pier, Simon Mason, also said: “I totally agree with it and TripAdvisor is what everybody looks at. I know local education authorities regard it as being one of the safest places in the UK.

“It also has the Great Orme and Little Orme, an unspoilt Victorian Promenade and Conwy nearby with its unbelievably history.”

Also delighted with the result was Berin Jones, Llandudno Hospitality Association Chairman: “We as a town can stand proud we are delivering an excellent customer experience whatever your age or ability.

“Around the UK there are so many places where there’s something for visitors to do but if you don’t get that customer care and hospitality experience you don’t leave with a good impression of the town,” said Jones and you would have to agree with him that Llandudno does leave a good impression.

Here’s to an even more successful result for Llandudno for next year’s poll and with events like Wales GB Rally, Llanduno Air Show, Llawn O2 and many other everyday attractions, you’d expect the town to be bustling even more in the near future.

The Top 10 on TripAdvisor: