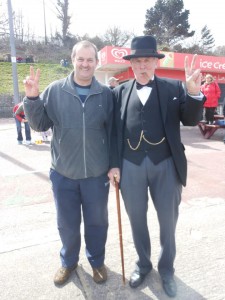 As any visitor or local to North Wales will know, there’s a sense of history that’s apparent wherever you go in the stunning region with the upcoming Colwyn Bay Forties Festival celebrating just that.

Colwyn Bay is one of the most prominent coastal towns along the Welsh coastline and is home to many of the attractions that make the north of Wales so idyllic and is also the location for Access All Eirias: a music festival that is one of the biggest of its kind throughout Wales.

Another event which is always hugely popular is the Colwyn Bay Forties Festival which is making a welcome return after a big demand in 2013. As an excuse to dress up in all the classic Victorian garb and regalia, you won’t find a better way to do just that.

During the Second World War, Colwyn Bay had a massively important strategic role in that it was the HQ for the Ministry of Food throughout the whole of the UK!

The festival is orchestrated by Colwyn Bay Heritage: a group who pride themselves on raising awareness on the Bay’s past by celebrating its rich history. Some of their other projects include heritage walks, developing an activity pack for children, setting up time capsules and the wonderful idea of recording memories from elders in the community, making it easier to be passed down from generation to generation.

Set to be held over the 12th and 14th of April, it is a community event with local people and businesses coming together for a fun two days of nostalgia. One such business is Duckworths: a popular tobacconist based in Colwyn Bay who always dress up in style for the occasion.

At this year’s edition, expect to see hear brilliant George Formby-esque acts as well as a fantastic swing ensemble. There will also be plenty of replicas, military vehicles, weapons, demonstrations and much more which channel the spirit of the forties.

However, the main event has to be the Ballroom Blitz Dance situated at Parc Eirias on the Saturday evening as there will be live music from great names such as Lilli de Carlo and an atmosphere to match.

This entry was posted in Events. Bookmark the permalink.